“TOLERANT: TransnatiOnaL network for Employment integRAtion of womeN vicTims of trafficking”
is a European project aiming to enhance the integration of third country national women victims of trafficking
in the labour market in the host countries and the EU in general, through employment support.

The project is funded by the Asylum, Migration and Integration Fund (AMIF)
of the European Union
and will run for 2 years
(January 2019 – December 2020).

Why is it necessary?

The need to implement TOLERANT project emerged from the fact that nearly 14.145 victims of human trafficking were registered in EU between 2017 and 2018, of whom 54% were female victims of sexual exploitation.

Following identification and meeting of the basic needs of victims of trafficking (accommodation, residence permit etc.), employment appeared to be the most important factor in the process of integration, enabling women to become financially independent and self-sufficient in the long-term.

civil society and other organizations / institutions providing support to VoT 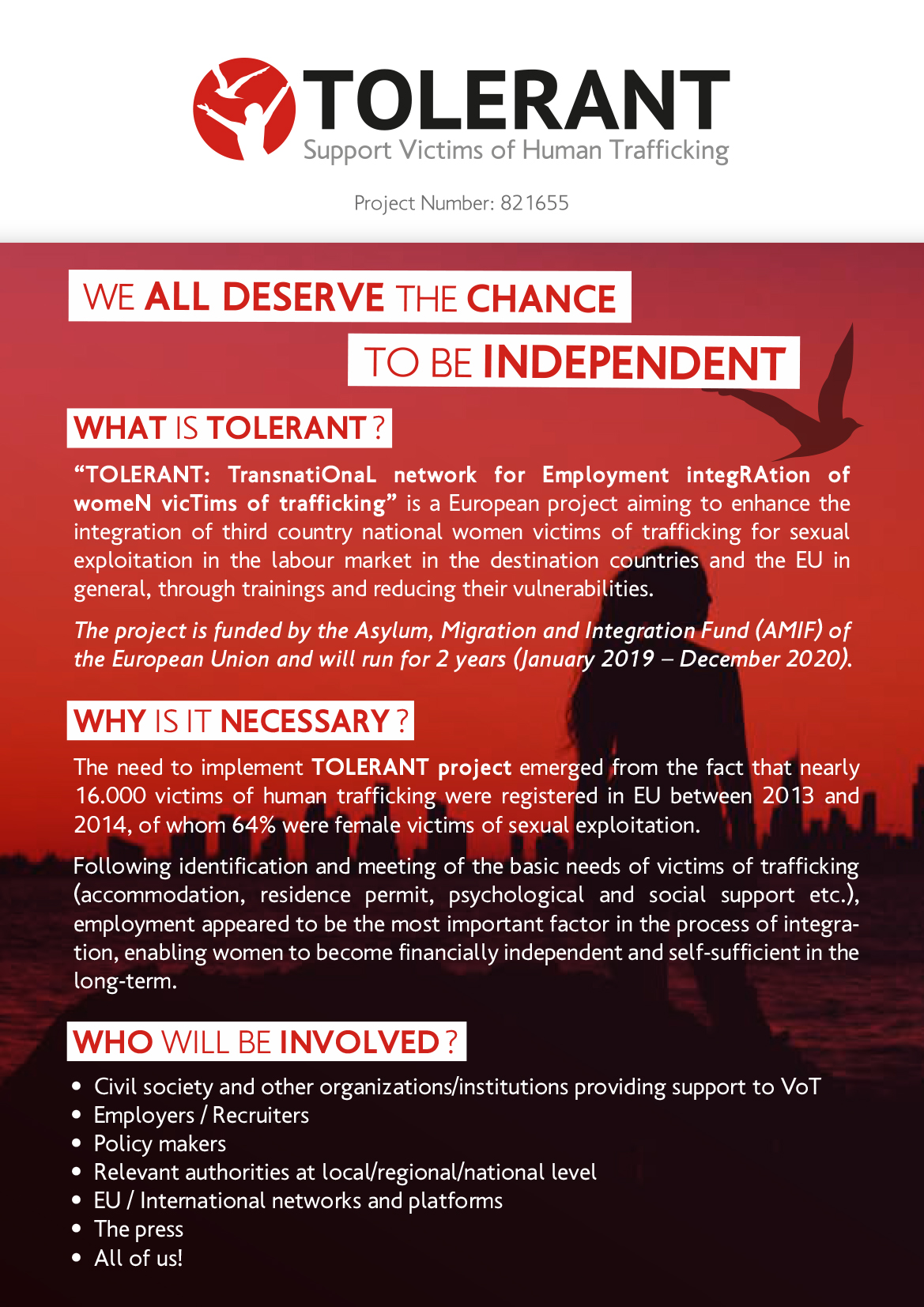 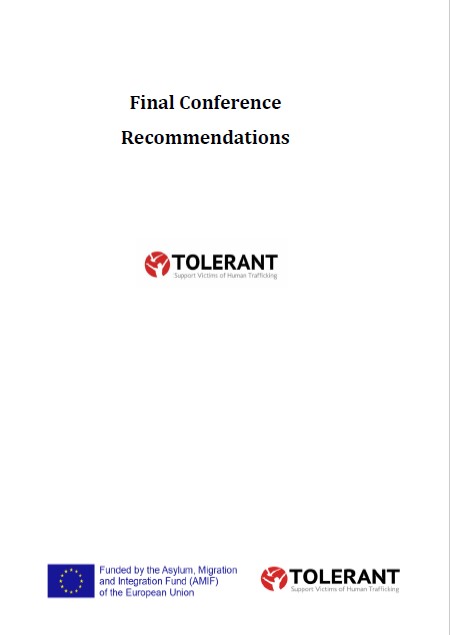 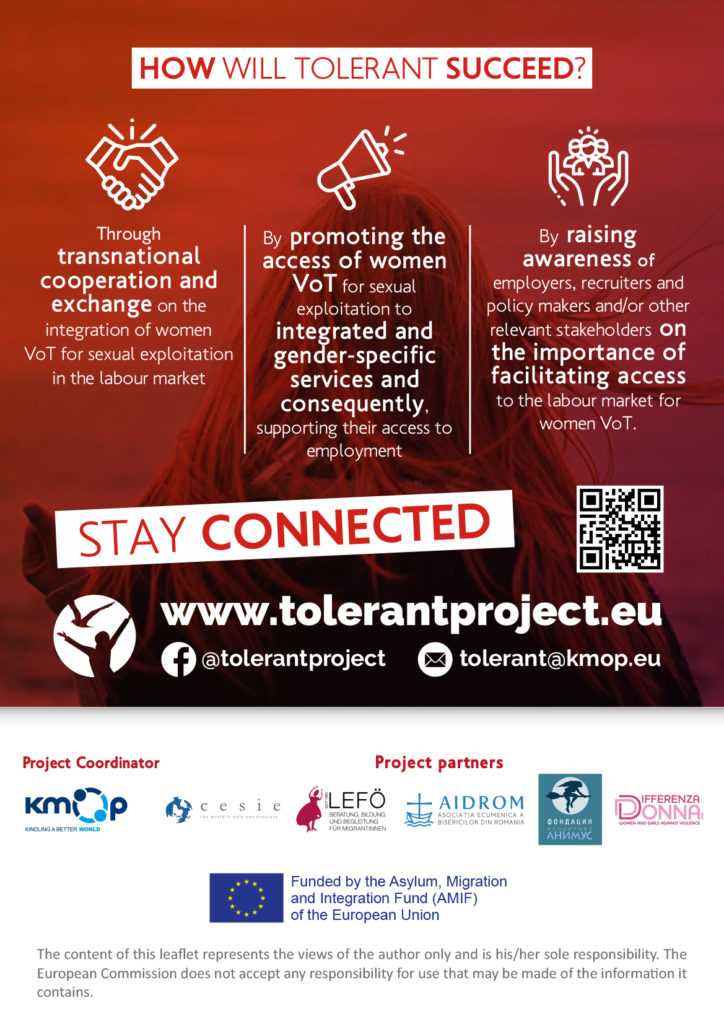 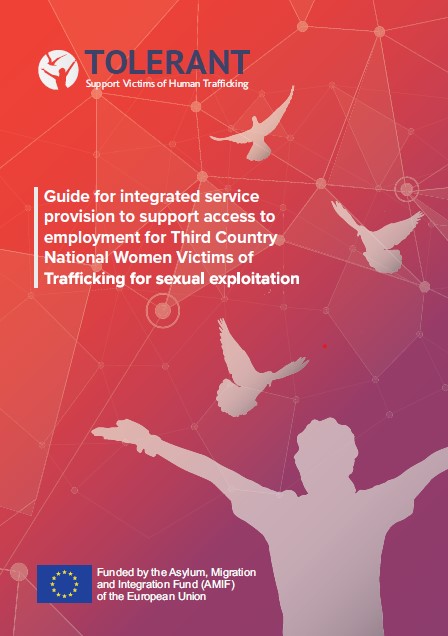 Become a Member of the Tolerant Network 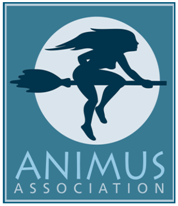 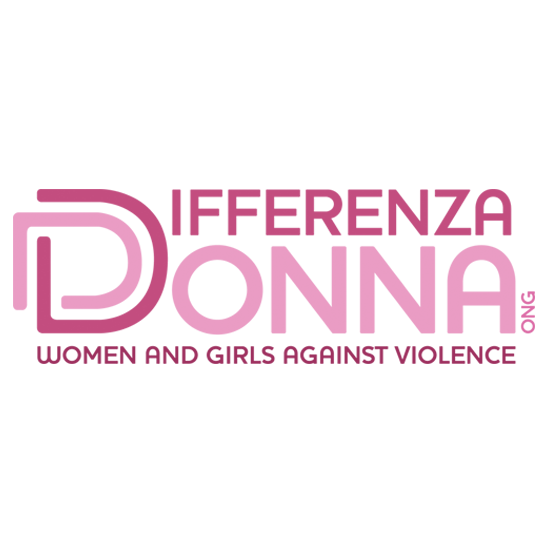 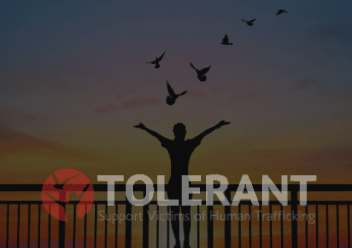 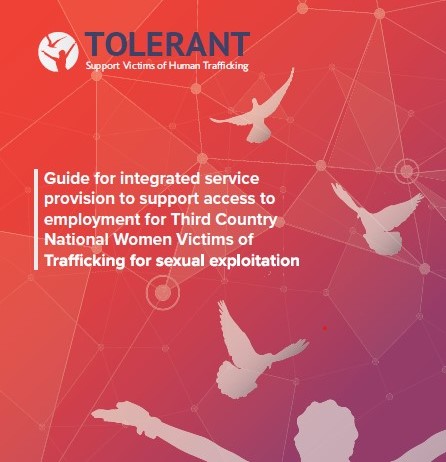 The TOLERANT Project (TransnatiOnaL network for Employment integRAtion of womeN… 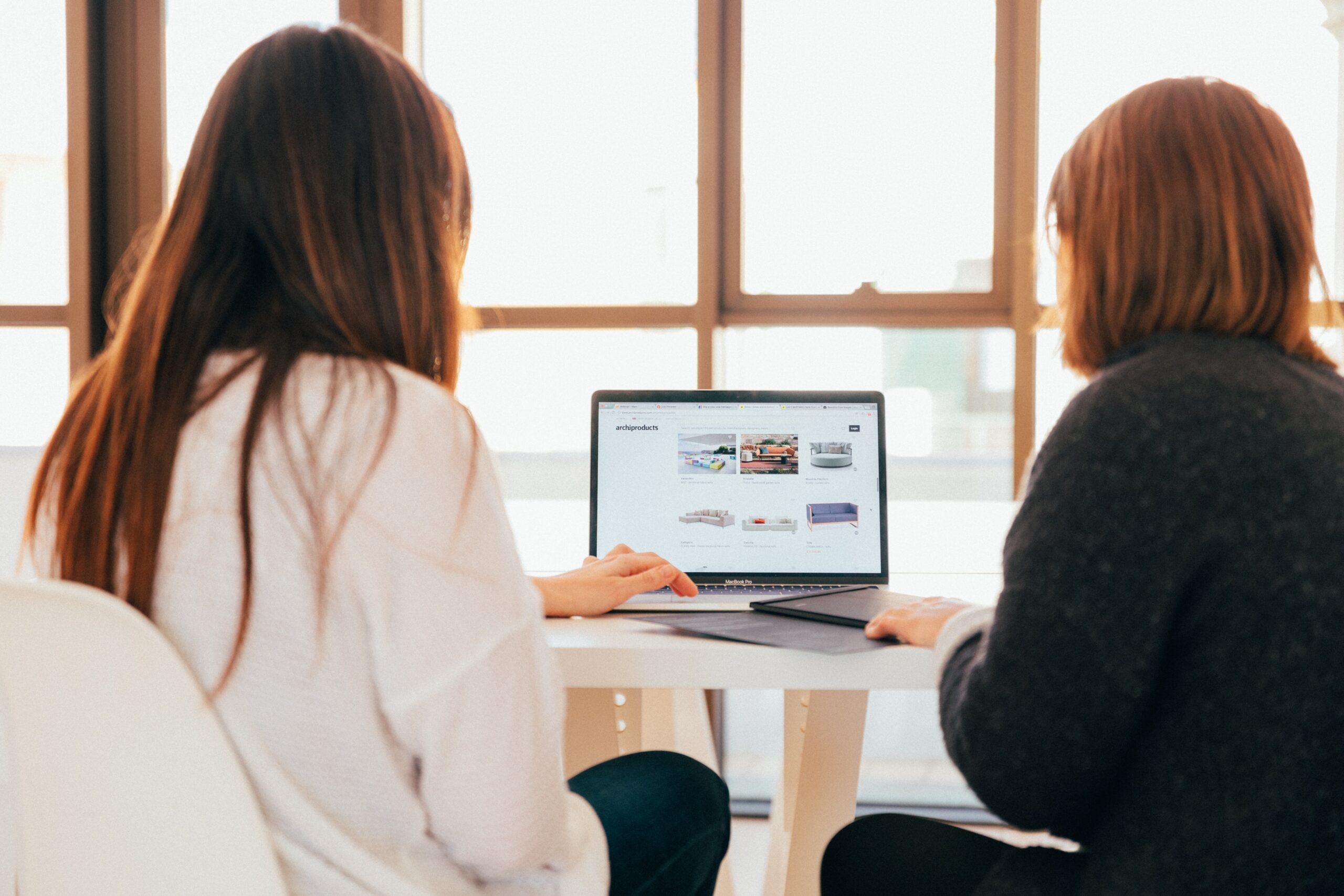 The challenges, risks and opportunities in employment integration and support…

Want to know more?
Fill in the required info and
you will be the first to know our news!

Animus Association Foundation is the Bulgarian member organization of La Strada and works both on the issue of trafficking and domestic violence since 1994. Animus works in three main areas: provision of psychological and social support, lobby and prevention activities, and training of different professionals on identifying and working with victims of violence.
For the last 25 years Animus Association Foundation (AAF) has proved to be the biggest and one of the most reliable providers of social services in Bulgaria. Presently the organization operates the following programmes for victims of violence and children at risk: 24-hour National Helpline; 24-hour Crisis Centre which works as Transit centre for trafficked persons; Trauma Centre for Children and Families; Centre for Reintegration, Counselling and Psychotherapy; Sofia Municipality Social Services Complex for Children and Families, including a Mother and Baby Unit.

AIDRom is an ecumenical organization of five Churches, founded in 1991, acting as a platform for communitarian development and inter-ethnical dialog. The organization aims at promoting social inclusion of marginalized people and strengthening ecumenical and inter-ethnical cooperation towards peace and stability.  AIDRO provides services such as: social services, socio-professionals services, human rights protection, services in the field of refugees and migrants, as well as reintegration for the victims of trafficking in human beings and domestic violence.

LEFÖ-Intervention Centre for Trafficked Women and Girls (LEFÖ-IBF) is the officially recognized victim protection facility for trafficked women and girls in Austria operating nationwide since 1998. LEFÖ-IBFs’ approach from its beginning is to focus on the diversity of the situations of exploitation migrant women experience has been the basis of its work throughout Austria. The overarching goal at LEFÖ-IBF is to offer supportive services that strengthen and expand the scope of action of women and girls affected by trafficking. This approach is also based on the basic understanding that trafficking not only infringes on women’s rights also on women’s human rights

LEFÖ-IBF offers save accommodation, psychosocial support, psychosocial counselling in court cases and legal assistance, assistance in accessing German courses, trainings and independent accommodation and employment as well as support and counseling for returning in the country of origin in cooperation with other organizations.

CESIE is a European centre of studies and initiatives established in 2001, inspired by the work and theories of sociologist Danilo Dolci (1924-1997). CESIE strives to develop, test and implement innovative educational non-violent methods for the benefit of groups and individuals who are vulnerable to social, economic and cultural exclusion in today’s world. CESIE’s head office is located in Palermo, Italy, and has six Units based on different targets and aims. The TOLERANT project in particular is coordinated by the Rights & Justice Unit of CESIE, whose principal objective is that of promoting equality, protecting the rights of people, preventing and developing responses to violence and discrimination.

Differenza Donna is a feminist organisation of women founded in Rome on the 6th of March 1989, whose aim is to emerge, fight, prevent and overcome violence against women. DD is active on both national and at international level and runs women’s shelters and several  help desks, including one shelter and three help desks for women victim of trafficking.

Since 1992, DD has received more than 30.000 women of which 50% migrants and asylum seekers and more than 1000 women victims of human trafficking for sexual exploitation.

KMOP – Social Action and Innovation Centre, situated in Athens, is a non profit organization with more than 40 years of experience in supporting vulnerable groups across the world. KMOP has expertise to design and implement new innovative ideas in order to ensure and promote positive social impact by building resilient communities and making world a better place for everyone taking into consideration all the modern societal, technological and environmental developments.

KMOP’s mission is to inspire and support innovative ideas to change people’s lives, tackling the causes of vulnerability and promoting inclusive and sustainable growth for everyone.

KMOP is the Project Coordinator of “Tolerant”, responsible for the project management and has been involved in all project activities, KMOP is also leader in the dissemination activities of the project (including the communication strategy, project website, social media, press releases, leaflets, newsletters, final conference etc…).